The season at Pittville Pump Room

Pittville Pump Room opened on 20 July 1830 to great acclaim and after much expense and indeed time which had elapsed since the laying of the foundation stone in 1825. It was the vision of Joseph Pitt, effected by the architect John Forbes, of being the grandest spa in Cheltenham and the crowning glory of the Pittville Estate. By the time it opened, what had become known as the ‘season’ was well established in the town, which already boasted a large number of spas. Numbers of residents and visitors to the town had burgeoned immensely since the discovery of the waters in 1716, the opening of the first spa in 1738, and in particular following the visit of King George III in 1788, which made taking the Cheltenham waters extremely fashionable and sparked the expansion of the town around its newly found source of wealth. 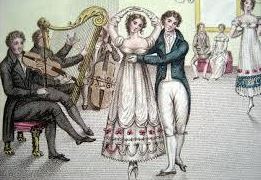 The Cheltenham season lasted from May to September – unlike the one in Bath which was a winter season from October to early June, and was determined by the sessions of Parliament in London – but developed in a similar way otherwise to the social seasons elsewhere in the country, serving primarily the social elite with time on their hands, who entertained themselves with balls, dinners, and whatever else might be the fashion of the day. With the rise in popularity of taking a cure, and the fame Cheltenham’s waters had gained, visitors and new residents had gravitated to the town from all over the country, including members of royalty and the aristocracy. It was also popular with military and East India Company officers, attracted to the town because of its growing society, the mild climate and the reputed beneficial quality of the spa waters to digestive systems disordered by service in India. Some came to live in the gracious residences which were going up as part of the building boom brought about by the expansion the new business in spa water created. Others came to visit for the season itself, but relatively few of the visitors stayed in hotels, opting instead for lodgings or the seasonal rental of houses. Private residences were rented on a long-term basis, furnished and with servants provided if required.

Throughout the season at the new and magnificent Pittville Spa, there were regular daily activities, as well as special events. In the daily routine, the waters were available each morning, from 6 am, and were to be taken on an empty stomach, followed by a walk in the fresh air in the gardens. The waters were both diuretic and purging, and people were urged to begin by taking smaller amounts to avoid nasty side-effects, and where experienced, to treat them with peppermint drops or tincture of cardamoms, and to increase exercise – for which the gardens in Pittville offered an attractive opportunity.

Inside the building, the waters were dispensed from the area in what is now called the apse, from the elaborate marble pump which can still be seen (although it was originally on the opposite side of the apse from where it now stands), delivered in glasses by serving ladies behind a counter in front of the pump. The main hall was available for socialising over drinking the water, before venturing out into the gardens for exercise, promenading, socialising, seeing and being seen.

Elsewhere in the building, there was a room dedicated for playing cards (where the modern foyer is situated), and upstairs a billiards room (the current Oval Room at the back of the building), a reading room and a library (the East and West rooms), where time could be whiled away perhaps in less clement weather.

Daily, during the season, a band would play to entertain visitors walking or riding in the grounds and pleasure gardens, but although there was a lot of socialising, the day was nevertheless based on “health” principles – the intention being to cleanse the body internally, and then undertake some gentle exercise. Aside from whatever benefits the water may or may not have provided, the regime itself was actually quite a sensible one. Dr Fothergill, who advised King George III on his visit to Cheltenham which started the whole business, prescribed a moderate diet, not dissimilar to much modern health advice: “The food… ought to be moderate in quantity, simple, easy of digestion and nutritious. It should also be accompanied with a due portion of farinaceous element and esculent vegetables”.  The drink perhaps did not following modern health advice quite so closely: “The drink may consist of good table beer, followed by a few glasses of generous wine.”

A guide to Bath published in 1811 refers to “the gay routine of public breakfasts, morning concerts, noon card parties, evening promenades, and nocturnal balls … in an endless and diversified succession”. However, the routine at Pittville was probably more sedate, at least on a daily basis.  But this might not perhaps be said of special events which were held regularly to celebrate particular occasions such as royal birthdays or the first day of the races. Typically such celebrations would consist either of a public breakfast followed by a ball, or an evening gala with a concert and firework display.

Two or three of these events took place each year in the 1830s and 40s, but as the years wore on, more and more extravagant and exotic “one-off” events were held as successive lessees tried to make the Pump Room and gardens profitable. (Lessees were businessmen – they were of course always men - who were responsible to Joseph Pitt for running the Spa and bringing in income from it.) Pittville and its Spa had in fact come quite late to the party, after the big expansion through the 1820s, and while the following two decades still saw activities continue with high frequency, the fashion for taking the spa waters began to wane. It also suffered from its location far from the town centre and the other spas and attractions there. Attractions were introduced, such as tightrope walkers across the lake, Van Amburgh’s Menagerie, which included on one occasion “a novel exhibition of his stupendous elephant swimming in the Pittville Lake”, and one of the upper rooms in the Pump Room being fitted out with a series of ‘Cosmoramic Views’ of European cities and monuments. A Grand Archery Fete and Gala was to be held on Monday, 24 September 1849 . The advert reads as follows:

A Grand Archery Fete and Gala
Will be held at those delightful GARDENS
PITTVILLE,
On MONDAY Next, September 24, 1849
When Mr. J. DUNTON will perform an AQUATIC
EXCURSION on the beautiful Lake, in
A COMMON WASHING TUB DRAWN BY 4 GEESE
THE CAR OF NEPTUNE,
With SEA HORSES, in REAL FIRE!
ASCENT OF A LARGE MONTGOLFIER BALLOON.
A Grand Display of Fireworks,
And various other Amusements
The Archery Matches will commence at Two o’clock and
cease at Four, afterwards Mr. D will proceed with the novel
Aquatic Fete, which will end the Afternoon’s Amusements.
The Gardens will re open at Six, and the Evening’s Enter-
tainments commence at Seven, when the feat of the Tub and
Geese will be again performed.
A first-rate MILITARY BAND is engaged, and every
arrangement is being completed to render satisfaction.
Admission, 1s; Children, Half-price.
Tickets may be obtained of Mr. Shenteon, Stationer,
Winchcomb Street; Mr. Harrison, Hair Dresser, North
Street; and Mr. Dunton, Archery Lawn, Pittville.

Apart from these events, financing of the enterprise was by subscription by private individuals, for which there were several levels, either for one person or for a family:

And various periods of subscription were available:

Non-subscribers could buy a one-off ticket which allowed them to take the waters in the morning and use the Rides, Walks, and Pleasure Grounds during the day. For a family in the 1830s and 1840s, this was 2/6d (about £14) and for a single ticket 1/- (about £6).

Subscribers would be a mixture of permanent Cheltenham residents, and people who had rented short-term accommodation as visitors for the season. Interestingly, the first name on the list of subscribers in September 1835 was one Prince George of Cambridge. Not to be confused with our current Prince George of course, he was the grandson of George III who had made Cheltenham’s spa water famous; he held the title of Prince until 1850, becoming the Duke of Cambridge on the death of his father, the previous Duke. After his death in 1904, the title fell into extinction until it was revived by Queen Elizabeth, who awarded it to Prince William on his wedding in 2011. At the time of his subscription the then Prince George would have been sixteen years of age, and his subscription was for the Waters for the season. No address was recorded for him however, so it’s doubtful he was resident in Cheltenham.

The Terms of Subscription had the following provisos for entry, including some illustrating the class divide:

“The Subscription does not include admission past the Gates at the Bridges, during any Public Entertainments at the Spa. Grooms will not be permitted to exercise Horses in any part of Pittville. The Nursery Maids of Subscribers with Children may be admitted into the Pleasure Grounds, but they cannot be allowed above the Bridges, unless accompanying their Mistresses.” 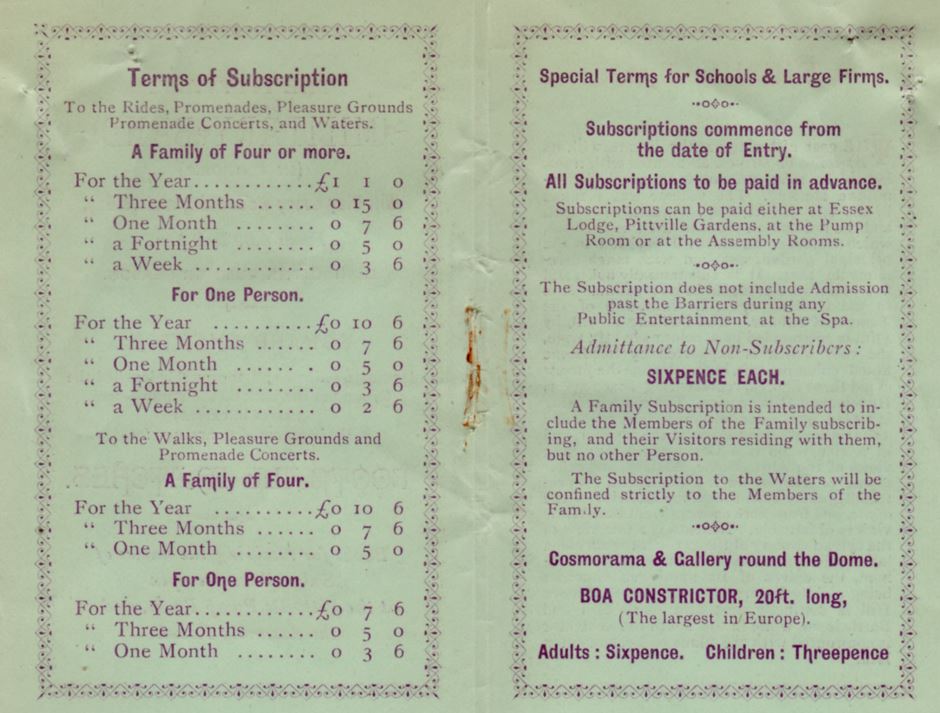 Sadly, the Spa could only ever be considered a partial success. By the period of 1887–90, when Edward Shenton took over as lessee, the terms for the subscriptions had been halved in face value, so that the top price for a family for the season had been reduced to one guinea – inflation was not an issue in those days, and in fact could be negative/deflation, so this amounted to about £135, just over half in real terms – and with commensurate reductions in the other rates. Shenton was able to claim that he had doubled the patronage of the Spa in his first year, so the reduction in charges obviously helped bring in more people, but there must still have been a financial impact on the business, and probably reflected how overpriced the subscriptions had been previously for all but the most wealthy. Even with attractions like swimming elephants and washing tubs drawn by geese, none of the lessees was able to raise sufficient funds to make the business viable, and as a result of this and the banking crisis of 1825, which impacted on the sale of plots for building on the Pittville Estate, Pitt himself died in debt to the tune of £150,000 in 1842 – a not inconsiderable amount even today, but a vast sum at that time, and equivalent to something like £15.5 million today. Edward Shenton was to be the last lessee, and he gave up his lease at the end of 1890, when Cheltenham Borough Council inherited the Pump Room and what we now call Pittville Park. This did not include items on the Spa inventory which give further insight into the attractions on offer, such as a monkey, a goat house on wheels, the Cosmoramic Views and a boa constrictor in a glass case!

So, despite the eventual business failure of the Spa, the Pittville Season was clearly a unique experience for those who had the time and money to indulge in it. Wouldn’t you have loved to try it?!

Based on a presentation given by Catherine Martin on 18 September 2021 in the grounds of Pittville Park, as part of Cheltenham's Heritage Open Days 2021.