What was a Public breakfast?

Public breakfasts were in effect elaborate buffet brunches. They could start any time between 9.00 or 10.00 in the morning and 4.00 in the afternoon, but at Pittville Pump Room they generally started at 12 noon and continued until 3 or 4 pm. They could be held either indoors or in the open air. A newspaper account from 1836 suggests that the upstairs rooms at the Pump Room were used.

The dejeuner itself was supplied in the rooms above stairs, and comprised an abundance of all suitable delicacies, including fruits of the choicest description. (Cheltenham Looker-On, 27 August 1836)

The fact that these events were typically held in the late morning or afternoon and yet were called “breakfasts” attracted comment even at the time. A writer in the 1840s, reflecting on a public breakfast given in 1792 when they were still a novelty, comments as follows:

Dr Russell was in high spirits, and laughed heartily at seeing the prodigious meal most of the company made of cold chicken, ham, fish etc., and said he should like to see Mrs Montague make the experiment of inviting all the same party to dinner, at three o’clock. ‘Oh!’ they would cry, ‘three o’clock! What does she mean? Who can dine at three o’clock? – one has no appetite – one can’t swallow a morsel – it’s altogether impossible!’ Yet, let her invite the same people, and give them a dinner, while she calls it a breakfast, and see but how prettily they can find appetites. (George Lillie Craik, The pictorial history of England during the reign of George the Third: 1792-1802, 1843, p. 759)

Grand public breakfasts were held in honour of special occasions such as royal birthdays and typically catered for upwards of 500 people. The opening of the Pump Room itself on 20 July 1830 was marked by a public breakfast which was served from midday in the gardens to over 1,000 people. A ticket to this event cost 7s 6d, equivalent to about £44 today.  Subsequently the price appeared to settle at around 6s, equivalent to about £35.

Public Breakfasts then became a regular feature of the season at the Pump Room during the early years of its operation, marking the King’s birthday, the anniversary of the Pump Room’s opening, or the start of the races.

Like a modern buffet, most of the food would be cold. A typical menu for one of the grander public breakfasts could include cold chicken, ham and other meats, potted lobster, baked salmon, potted pigeon and boiled eggs with hot rolls, muffins and toast, plus a range of sweet items such as tartlets, jellies, and creams. Coffee and chocolate would be provided as drinks.

The menu for a public breakfast held at Chelsea in 1846, which started fashionably late at 4.00 pm and went on till 7.00 pm, included:

The food would be laid out on long tables and people would either sit round the table and hand the food to each other, or sit at small tables and help themselves to food from the long tables (like a modern buffet). One or two gentlemen might be asked to carve the meats.

Public breakfasts on a more modest scale were also laid on during the season, although there is no record of this happening at Pittville. In 1781 the Cheltenham Chronicle advertised a weekly public breakfast which was held every Monday at 10.00 am “in the Long Room next to the Well”.

Thomas Rowlandson’s engraving of “The Public Breakfast” - no 11 in his series entitled The Comforts of Bath - shows a somewhat riotous group of around sixteen people sitting indoors on benches around a long table. The image dates from 1798; the following year, Jane Austen wrote to her sister Cassandra from Bath:

There is a public breakfast in Sydney Gardens every morning, so that we shall not be wholly starved.” (Letters of Jane Austen, edited Edward, Lord Brabourne, London, Bentley, 1884) 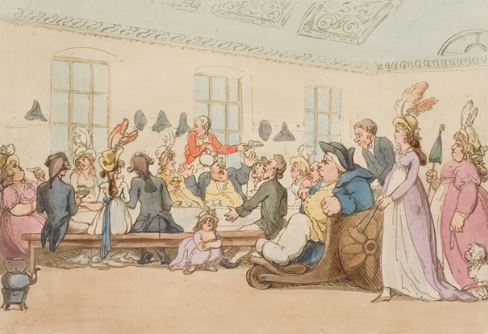 “The Public Breakfast”, plate 11 from The Comforts of Bath, by Thomas Rowlandson (1798)
(Wikimedia Commons)

The word “public” doesn’t necessarily mean that all these events were open to all and sundry.  It can also imply that a meal usually eaten in private would instead be eaten in company. This is clear from the fact that public breakfasts could be hosted by private individuals with a private (and often exclusive) guest list.

The newspapers of the time contain an account of one given by Georgiana, Duchess of Devonshire, at her villa, Chiswick House, in June 1802. Entry was only for those of note in the fashionable world – around 700 of them. The guests, who included the Prince of Wales, did not start arriving until the early afternoon and sat down to their breakfast around 4.00 pm. The tables, which were set with bouquets of fresh flowers and piled with refreshments, were scattered over the estate, both indoors and outdoors. The Morning Post describes the scene:

In the house covers were laid for 200, viz. in the two salons, the dining and green-rooms, and the dressing-room. In the Temple, &c. 100 were accommodated, and in the two Grand Marquees, and the other tents, about 200 more. Tables were likewise placed under the trees at the entrance of the lawn; the effect was cool and refreshing, the situation being impervious to the rays of the sun… the desert of fruit was very fine, cherries, strawberries, peaches, nectarines, pines, in abundance. (Morning Post, 28 June 1802)

By 7.00 pm the guests started to drift away and an hour later most had departed, leaving the duchess’s servants to begin what was no doubt a massive clearing-up operation.

This kind of private public breakfast inspired an episode in Charles Dickens’ Pickwick Papers, published in 1836 but with the action supposedly taking place in the 1820s. Mr Pickwick is invited to an open air public breakfast by a society hostess, Mrs Hunter.

‘My wife, sir—Mrs. Leo Hunter—is proud to number among her acquaintance all those who have rendered themselves celebrated by their works and talents. Permit me, sir, to place in a conspicuous part of the list the name of Mr. Pickwick, and his brother-members of the club that derives its name from him.’

‘I shall be extremely happy to make the acquaintance of such a lady, sir,’ replied Mr. Pickwick.

‘You shall make it, sir,’ said the grave man. ‘To-morrow morning, sir, we give a public breakfast—a fête champêtre—to a great number of those who have rendered themselves celebrated by their works and talents. Permit Mrs. Leo Hunter, Sir, to have the gratification of seeing you at the Den.’

‘Mrs. Leo Hunter has many of these breakfasts, Sir,’ resumed the new acquaintance—‘"feasts of reason,” sir, “and flows of soul,” as somebody who wrote a sonnet to Mrs. Leo Hunter on her breakfasts, feelingly and originally observed.’ (Charles Dickens, The posthumous papers of the Pickwick Club, London, 1836, chapter XV) 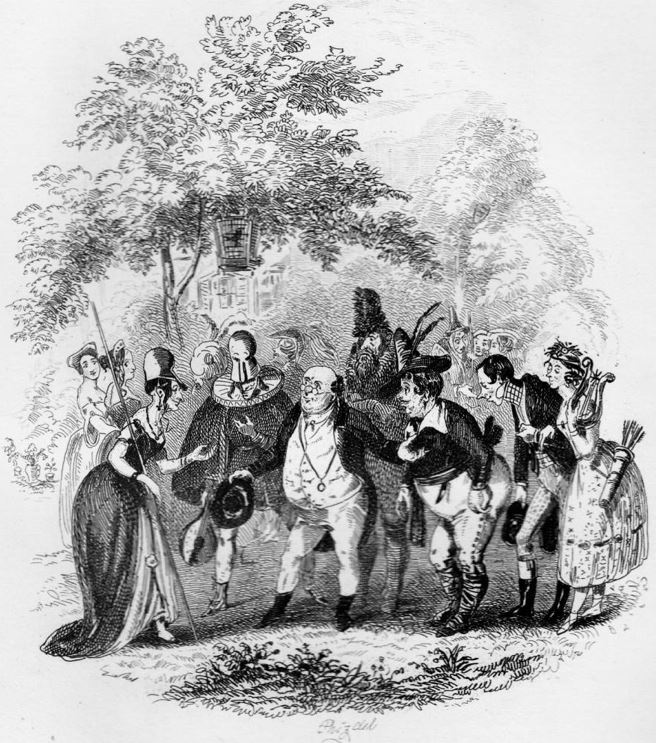 Mr Pickwick subsequently finds to his consternation that the event requires fancy dress, and the chapter proceeds to satirise the various literary figures and social climbers who attended.

It’s clear that the public breakfast provided ample material for satirists. The satirical poem, The New Bath Guide, pokes fun at a public breakfast held in Bath by Lord Raggamuffin, who has recently become a peer

And to day with extreme complaisance and respect ask’d
All the people at Bath to a general breakfast.

The company made a most brilliant appearance,
And ate bread and butter with great perseverance;

All the chocolate too, that my Lord set before ‘em
The ladies dispatched with the utmost decorum.
…
I freely will own I the muffins preferr’d
To all the genteel conversation I heard.
(Christopher Anstey, The new Bath guide: or, memoirs of the B-r-d family; in a series of poetical epistles, 1766)

The decline of the public breakfast

The popularity of the public breakfast declined as the century wore on, both at Pittville and elsewhere. Interestingly, the grand public breakfast held at Chelsea in 1846 was advertised as a kind of retro, nostalgia event. It was billed as “Ranelagh Revived” and attempted to recreate for a mid-nineteenth century Victorian public the Georgian atmosphere of Ranelagh Gardens, the famous pleasure gardens which opened in 1742 – now the site of the Chelsea Flower Show.

At Pittville they continued sporadically into the early 1850s and then appear to die out. Interestingly, the tradition appears to continue in the USA and Australia, where public breakfasts tend to be held by churches, charities, and sometimes political parties.

Based on a presentation given by Hilary Simpson on 18 September 2021 in the grounds of Pittville Park, as part of Cheltenham's Heritage Open Days 2021.